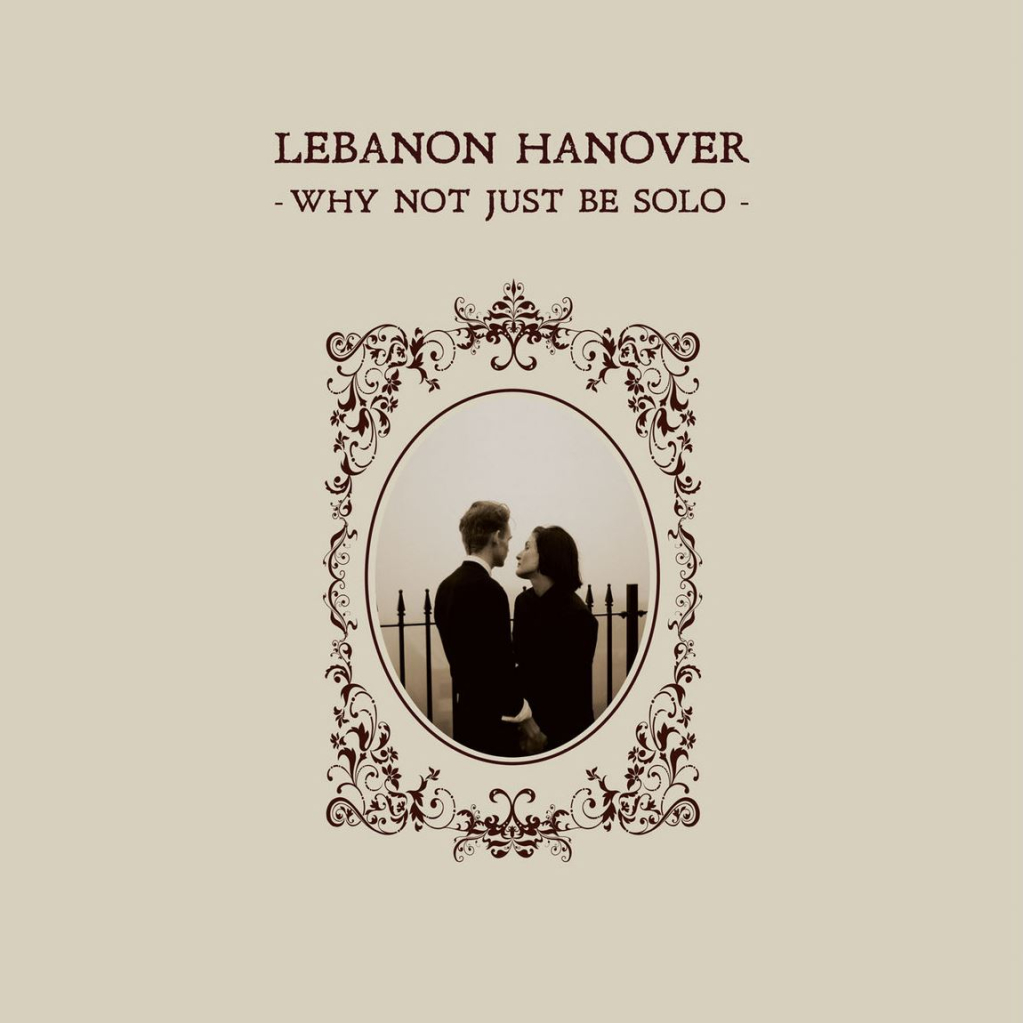 Why Not Just Be Solo

Can't be delivered to the following countries:

Lebanon Hanover - Why Not Just Be Solo

The album opens with the Saddest Smile whose minimal guitar is overlaid with a lamentational vocal. It is a pensive, introspective exploration of disenchantment, isolation, and the self-hatred projected on others that sets the tone for the rest of the record.

A Very Good Life proceeds with a crunchy snare, and plodding bass that leads into Larissa Iceglass's melancholic vocal style, already evolved in both production and range highlighted by a haunting echo, and spectral effects, lyrically continuing the theme of loathing and projection explored in the previous track.

The word Albatross is often used as a metaphor for a curse-like psychological burden. It is an allusion to Samuel Taylor Coleridge's poem The Rime of the Ancient Mariner. Here in a song propelled forward with strumming guitar, bass, and scratchy backing percussion, icy vocals, and introspective pauses, Larissa Iceglass grapples with the warring between two internal factions: the head and the heart.

I'm A Reject changes it up with a more upbeat tempo, bigger sound, and almost tribal melody, sculpting a mood that's heavy on the echoey distortion. Sounding like she's singing in a mausoleum, Iceglass's rich vocals wryly recount an anthem of pale faces laughing at banality as they triumphantly wear black and haunt cemeteries.

Cadaverously Quaint opens with a very unsettling synth staccato rhythm that launches into early-80s snare infused dance track, evoking the early years of Mute and Some Bizzare. Maybelline's blood-curdling vocal is both ghostly and vampiric in its own almost indecipherable language.The song's nightmarish, howling wind effects add to the overarching atmosphere of what it might be like if Mary Shelly were to merge the myths of both Pygmalion and her Modern Prometheus.

Bring Your Own Wine opens with a marching drumline leading into a classic guitar post-punk guitar riff, overlaid with Iceglass growling and purring her disgust toward humanity both inward and outward.

Northern Lights is a defiantly romantic song, written as a damning criticism of how unfashionable it is to be a romantic in our modern era.The song is a rejection of intimacy through drug-induced chemistry and illusory online personas. The melody takes a more experimental approach with its percussion, bizarre space laser effects zipping loudly over Larissa's melancholic vocals. It is celestial, dark, and vast. In the video, we see William and Larissa ironically communicating via Skype, and watching the Northern lights via screensaver while the two sip tea, leading the pair to go outside for a physical embrace amongst the misty seaside sky.

No One Holds Hands switches back Maybelline's vocal deep vocal growl channeled through minor chords, medieval-sounding yet futuristic synths, distorted guitars, driving forth a melody that is both primal, and lamentational; cresting and ceasing abruptly.

Why Not Just Be Normal continues the narrative of I'm a Reject, caustically critique the mundane living with minimal vocals conjuring a plaintive, atmospheric feeling, like a flower in a suburban desert of housewives and xenophobic war veterans.

Somehow We'll Get Through This opening in palpitating distortion, throbbing percussion, and delay, evoking the feeling of listening whilehalf-submerged underwater or listening through gelatin. The echoing vocals augment this distorting effect, like ghosts calling to us from the afterlife, or dissociating psyches slowly returning to the body after turmoil in a relationship.

The album closes out with its third gothic anthem, Avalanche. Introduced with a bassline driven in captivating cascade, with gliding guitars followed by eerie horn elements. Although less morose in delivery, its soaring and deeply emotional guitar solo sweeps over the track lifting it out of darkness while rejecting the cold and callousness of the 21st century.